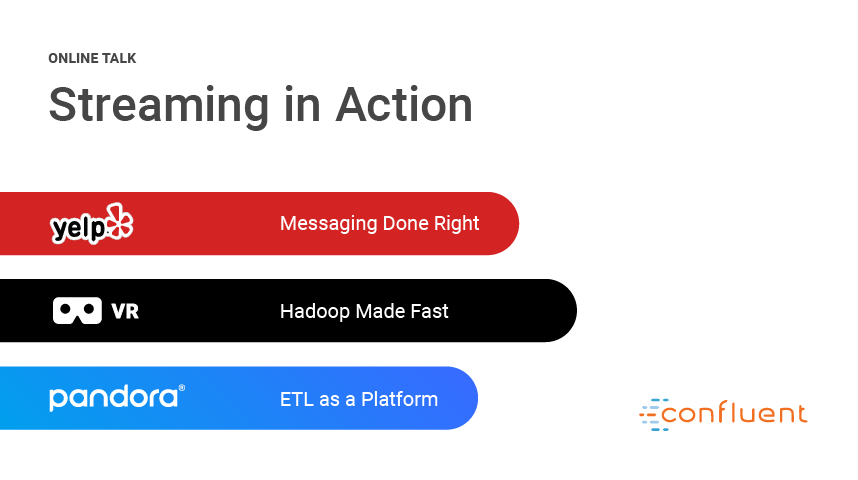 Join 3 Apache Kafka® community members as they share how they leverage a streaming platform to speed up development, evolve their infrastructure, and provide real-time streaming applications and data pipelines.

Register for the on-demand recording.

How Yelp Leapt to Microservices with More than a Message Queue

Without seeing what’s wrong with today’s messaging queues, it can be initially confusing to view Apache Kafka as more. By adding additional functionality, true storage, and guarantees it opens opportunities to take full advantage of a publish/subscribe model.

Joined by Yelp’s Justin Cunningham we’ll see how their infrastructure has quickly evolved. Powered by Kafka, Yelp has made the leap to microservices and is seeing the benefits of efficiency and performance.

In this talk, we’ll show how a streaming platform can be considered Hadoop Made Fast. With Apache Kafka and it’s Streams API it’s possible to move much of what you would have done in a batch-oriented, sluggish process into a real-time one. We’ll cover the benefits of bringing concepts of Hadoop to real-time applications.

Then, Greg Fodor will share how he's worked with stream processing to solve hard VR challenges. This includes real-time mirroring, capture, and playback of networked avatars in a shared VR environment. Greg will also cover the design patterns they used for Kafka's Streams API and the lessons they learned along the way.

Part 3: ETL as a Platform

ETL can be painful with dirty data and outdated batch processes slowing you down; there has to be a better way. In this talk we’ll discuss the benefits of introducing a streaming platform to your architecture including how it can greatly simplify complexity, speed up performance, and help your team deliver the features they need with real-time data integration.

Pandora’s Lawrence Weikum will discuss what they’ve done to bring real-time data integration to the team. We’ll review their Kafka-powered data pipelines and how they make the most of Kafka’s Connect API to make it surprisingly system to keep systems in sync.